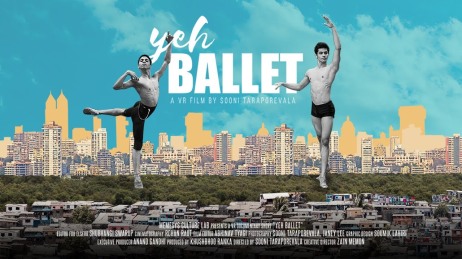 Two boys from the poorest sections of Mumbai society find themselves in the Mumbai Dance Academy. They don’t much like each other at first but the imported ballet teacher thinks they have what it takes. With degrees of commitment that waver they find themselves propelled, sometimes involuntarily, towards a tantalising future where their dance skills might lift them above the nonsense of poverty, community struggle, religious strife and family. Yeh Ballet could be the most stereotypical dance film ever made. Rags to riches in Mumbai. That it’s not owes a huge amount to the fact that it is remarkably upfront exactly about the impact of that poverty, those communities, religion and the pressures of family. It is damn good.

Writer/Director Sooni Taraporevala has been exploring the slums of Mumbia for over three decades now. Hers was the Oscar nominated screenplay for Salaam Bombay in 1988. And that sense of knowing a city and its people is what sets Yeh Ballet apart. Without preaching, it brings together (and sets up tensions between) Muslims, Hindus, Christians and Jews, between those who speak to each other in English and those who do not, between people who hear and feel music and those who stamp DENIED on visa applications.

Julian Sands plays Saul, an Israeli ballet dancer who comes to Mumbai to teach. He doesn’t speak the language and doesn’t much like the people. But he sees something in Asif (Achintya Bose) and Nishu (Manish Chauhan) and, falteringly, helps them realise their talent. This being a semi-realistic portrayal of India though, it isn’t enough to just be good at dancing. There are hospital bills to pay as well as bureaucracy to pass. Gangsters who prey on the poor and desperate must be avoided and if you want to kiss the girl you better hope her religious fundamentalist brother isn’t in the vicinity.

All of this is directed with real brio by Taraporevala and the mostly young cast perform with distinction. Ironically, you might feel shortchanged on the ballet which never really gets out of the rehearsal space but there are several splendid dance set pieces. The music is really good too.

Yeh Ballet premiered on Netflix about a week ago and seems to have enjoyed mostly positive reviews. In the week since its release there have been race riots in India. On the one hand, a brutal reminder that supposedly secular India is unfortunately under the control of the sort of populist nationalists who have no issue with the occasional pogrom, on the other, a reminder, via the on screen coda at the end of Yeh Ballet that even in this world it is possible to rise above the shit. Possible, but it’s not easy. And it’s to Yeh Ballet‘s great credit that we get that message loud and clear packaged in enjoyable little music box.